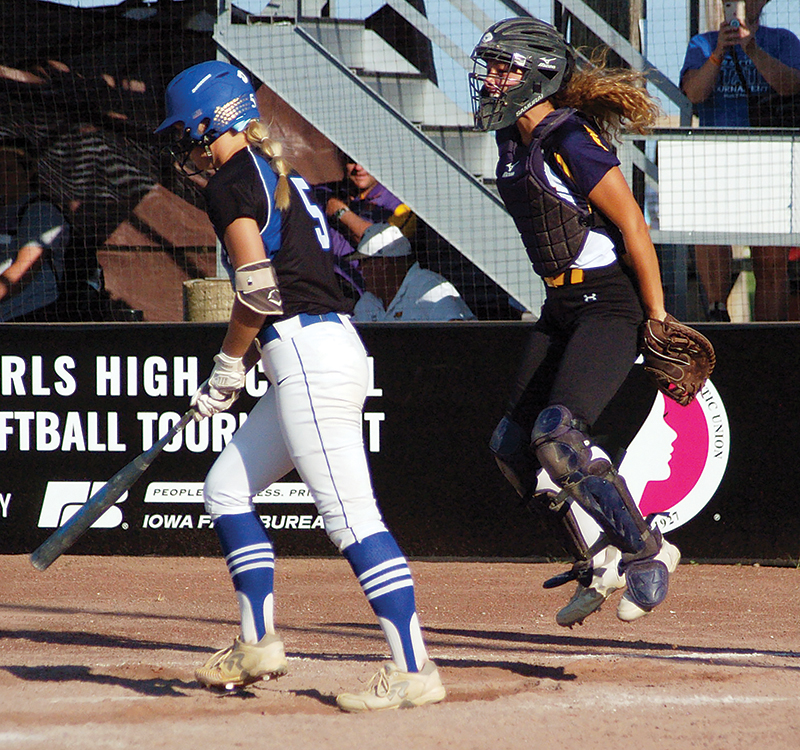 FORT DODGE — Ogden refused to give the East Marshall softball team a taste of its own medicine, and Madison Farrington made the Bulldogs sick about it.

East Marshall’s senior catcher slugged a two-run home run into the wind in the bottom of the first inning and the fifth-ranked Mustangs marched to a 4-0 victory over No. 14 Ogden in the Class 2A quarterfinals of the Iowa Girls High School State Softball Tournament on Monday at Rogers Sports Complex.

Loecker, a University of Iowa commit, crushed a changeup off the top of the left-field fence two pitches into the game, but that was the last time the Mustangs (32-4) gave her a chance to hurt them.

East Marshall intentionally walked Loecker her next two plate appearances before giving junior pitcher Kodie Hoskey the opportunity for redemption in the top of the seventh and the Mustangs protecting a four-run lead. Hoskey handcuffed Loecker for just her fourth strikeout of the summer, sending the Bulldogs (25-8) to the consolation bracket with only their second shutout loss this season. 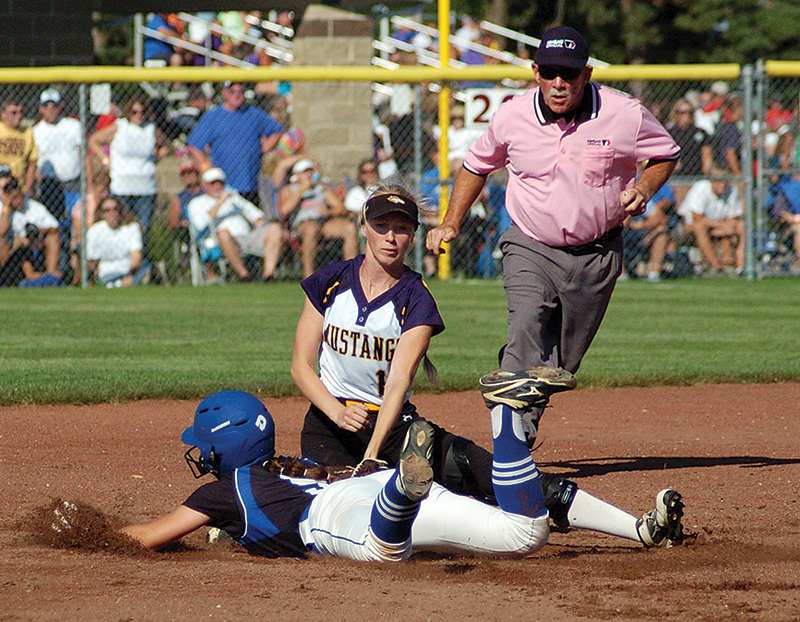 “She’s the best I’ve seen in quite a while,” East Marshall head coach Jary Hoskey said of Loecker, who leads the state with 20 home runs. “I’ve had some good hitters but nothing as good as this girl here swings the bat.”

Coach Hoskey could just as easily have been referring to his senior catcher.

Farrington’s two-run round-tripper sent the East Marshall faithful into a frenzied celebration, and the Central College signee ran the bases with emotion breaking through in a rare display for the senior standout. She pumped her fists and felt the moment flowing through her as she moved into a tie for the school’s single-season (14) and career (32) home run records while giving the Mustangs all the momentum in the early going.

“Oh my gosh, the second I hit it I knew it was gone,” said Farrington, who suddenly started to cry tears of joy. “I was instantly happy. I was literally celebrating two steps out of the box, and rounding third I literally was getting so emotional because I tied our school’s — I don’t know why I’m crying — single-season and career home runs records and it’s just so special — oh my gosh, this is ridiculous, I am not an emotional person I am not kidding — considering it’s my senior year and I hit a home run at state.”

The Mustangs made good on three more hits and an Ogden error in the bottom of the third inning to double their advantage, and the 4-0 lead held for Kodie and the defense behind her. East Marshall didn’t make an error, and it didn’t hurt that Kodie chalked up 12 strikeouts to ease their burden. 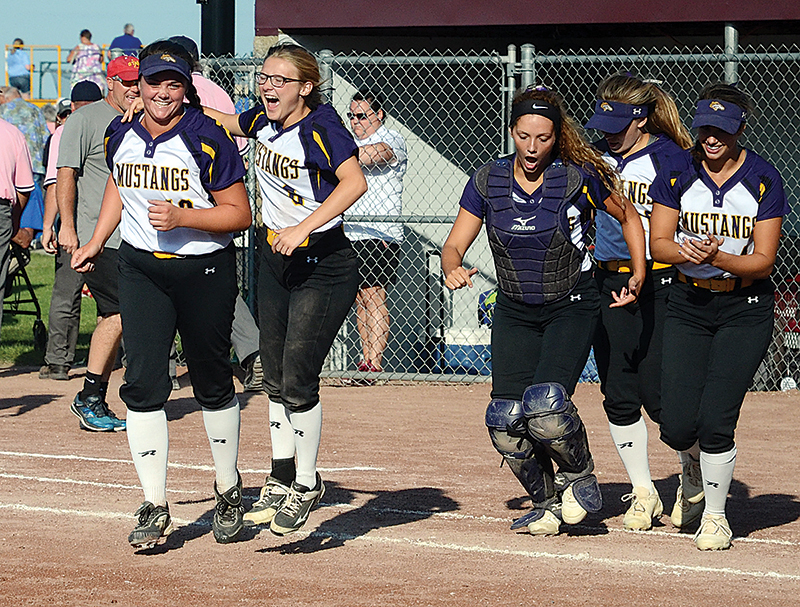 “The Kodie was throwing the ball and hitting her spots really well, I just thought we wouldn’t let [Loecker] hurt us and 2-through-9 had to hurt us, and they didn’t,” coach Hoskey said. “Twelve strikeouts, that means four innings we don’t have to play defense so that’s attributed to our pitching, but we work an awful lot on the defensive side of the ball.”

Right now it’s all working for the Mustangs, who made it 19-straight victories heading into Wednesday’s state semifinals. East Marshall will meet sixth-seeded and 13th-ranked Alta-Aurelia (21-9) after the Warriors bumped off third-seeded and eighth-ranked Central Springs (28-8). Alta-Aurelia senior pitcher Abby Kraemer tossed a one-hitter with nine strikeouts and three walks for the win, unleashing the first upset of the state tournament.

“I think we’re trying to knock the door down and go to the state championship, so that’s our next goal is to win on Wednesday and hopefully if we win we’ll be ready for Thursday,” said Kodie.

The Mustangs will play two more games at state regardless of Wednesday’s outcome, either advancing to Thursday’s 8:15 p.m. title bout or dropping into the 7 p.m. game to decide third place.

Ogden takes on Central Springs in today’s consolation round. East Marshall will practice in Le Grand before heading back to Fort Dodge for its last two games of the season. 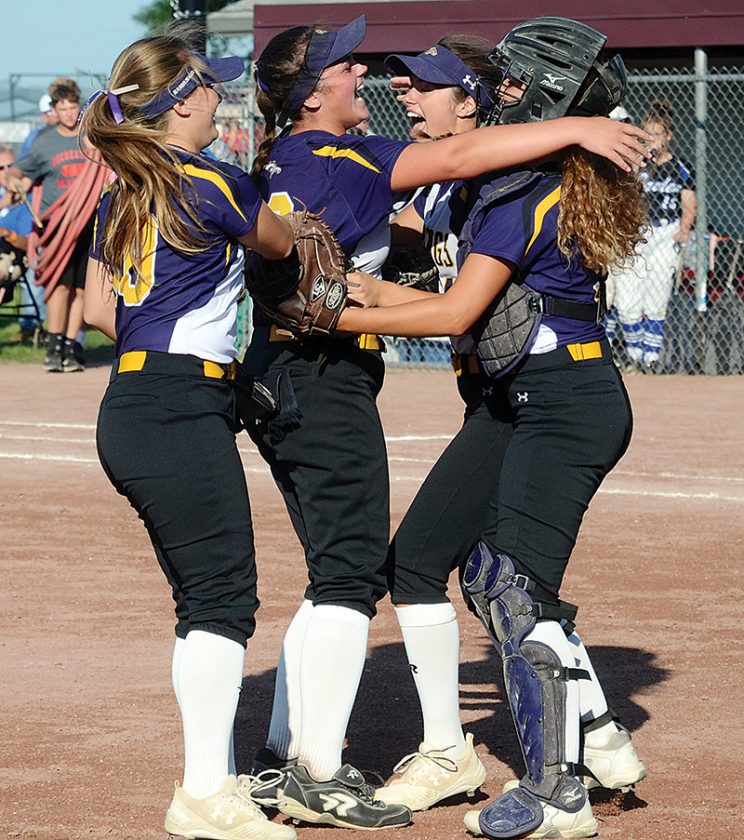 “For those eight seniors, what a fitting way to go out,” coach Hoskey said. “We now know we’ll play two games, whether it’s for the state championship or for third place, and we’ll come back up here with the mindset we’re going to play two games.

“Nothing I can say but kudos to our fans and the support that’s been given us. I think we had the loudest fans here and it just helps the girls. This morning we had a send-off with fire trucks and sirens and cop cars and engines and ambulances — they took us all the way to State Center. It was great.”

East Marshall improved to 4-2 in first-round games at state, sparked by Monday’s fast start. After Loecker’s leadoff double, Kodie retired the next six batters she faced. Reagan Church led off the third with a single for the Bulldogs, and the Mustangs walked Loecker one out later. Hoskey got Lauren Kennedy on strikes, and Farrington fired behind Church’s pinch-runner Helena Nelson to catch her napping at second base as center fielder Melinda Puumala snuck in behind her for the pickoff to end the inning with a double play.

Puumala then led off the bottom half with an infield single, moved up on Maria Rasmusson’s sacrifice bunt, and took third on McIlrath’s single up the middle. Coach Hoskey and Puumala got their signals mixed up as Puumala stopped at third instead of trying to score, but she crossed home plate anyway when Farrington’s fly ball to shallow left field was dropped.

Juliana Arifi then loaded the bases when McIlrath beat the Ogden third baseman to her bag on a grounder right to her, and Hannah Birks followed with an RBI single to right. Loecker got out of the bases-loaded jam from there, but the Bulldogs suddenly trailed 4-0. 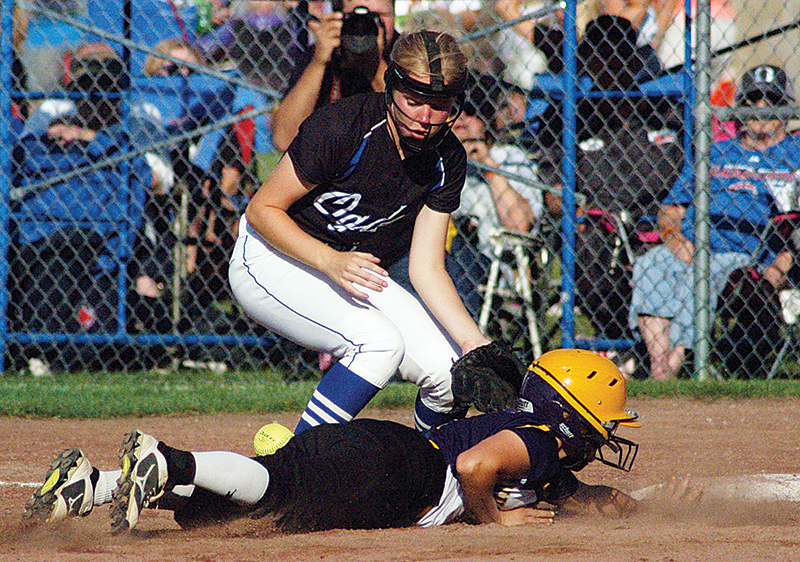 Rasmusson and Hoskey had the only East Marshall hits from then on, but all Ogden got was a pair of singles by Hannah Dutcher. Kodie closed out her eighth shutout of the season by striking out Loecker, which by the numbers is a feat in itself.

“I was super-proud of Kodie for the last at-bat,” said Farrington, “that she beared down and got the last out and got [Loecker] out. I think it’s that much sweeter just to get her swinging.”

Ogden head coach Mike Moses didn’t have any problems with letting Farrington swing in the first inning with an open base, nor did he double back on the decision after the game was over.

“I think my pitcher’s good, she’s faced batters like that before,” Moses said. “I’m sure [Loecker] regrets the pitch she made. Obviously she missed her spot and their catcher drilled it.

“[Walking Farrington] never came to mind. [Loecker] gets walked all the time. It is an interesting chess match. We’ve been dealing with that for a long time, we’ve usually had somebody come through. I think we had runners on base about every inning but the second and seventh, but we just didn’t get the hit when we needed it.” 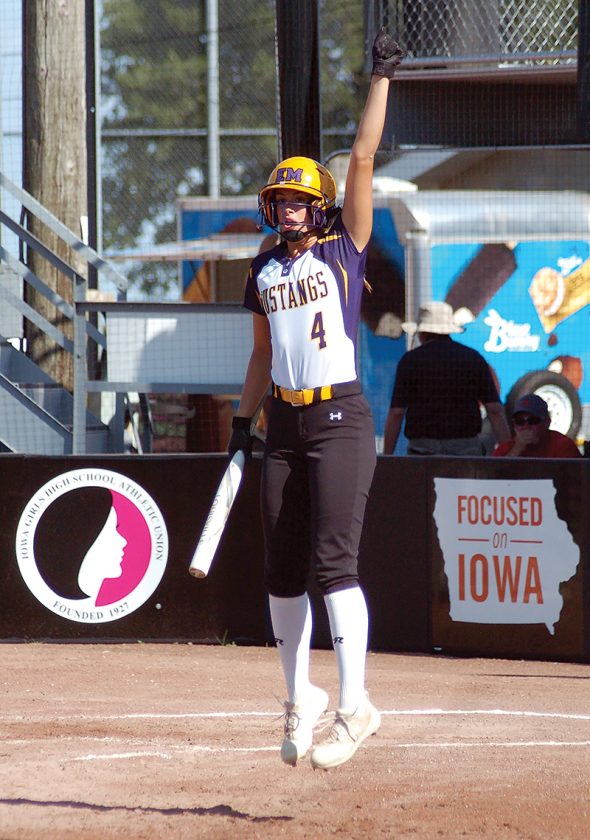 The Mustangs did, and they’ll get the chance to do it again. Twice, in fact.

“I can’t wait to play Wednesday,” said Farrington. “If we win we’re in the championship game, and that’s all I can ask for my last year.”

T-R PHOTO BY ADAM RING – Marshalltown’s Dylan Eygabroad, left, slides across home plate with the Bobcats’ second run, scoring on a double by Wade Canaday in the fifth inning of Monday’s Class 4A Substate 3 semifinal in Pleasant Hill.

T-R PHOTO BY ADAM RING – Southeast Polk’s Aaron DuToit (17) slides in to home plate just ahead of the tag from Marshalltown junior catcher Will Van Buren during the fourth inning of Monday’s Class 4A Substate 3 semifinal game in Pleasant Hill. The third-ranked Rams eliminated the Bobcats 7-2.