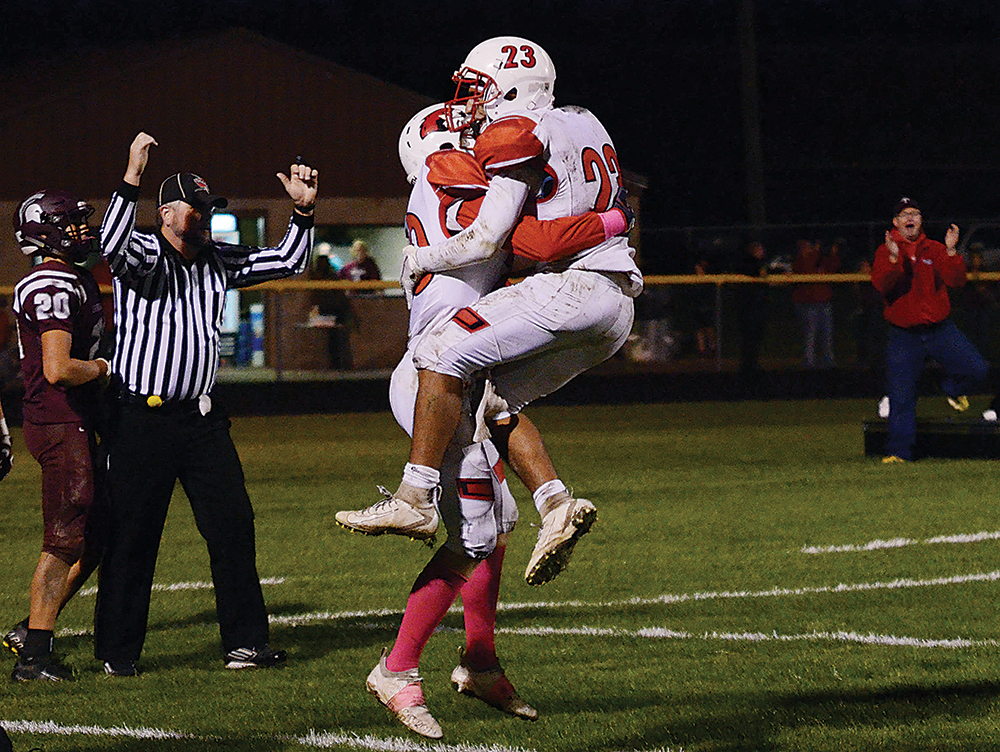 GRUNDY CENTER — As the saying goes, the third time is the charm.

That stayed true for Class A No. 3 North Tama, after being stopped twice before completing their 14-13 comeback win over No. 4 Grundy Center that came down to one final drive on Friday night.

The Redhawks (6-0, 4-0) had failed to score on two consecutive drives deep in Grundy Center territory, but with just 11 seconds left on the clock, quarterback Gabe Kopriva found wide receiver Tayte Payne on a slant route. Payne came down with the ball on a one-handed, 14-yard grab that scored North Tama’s go-ahead to touchdown.

“We had three receivers on one side,” head coach Tom McDermott said. “Normally what we do is our backside runs a slant pattern to the inside because usually they overcompensate. We also moved our motion. We had Tayte, who normally ran that slant to a slant corner because we thought they would bite big-time on the slant and sometimes it works and sometimes it doesn’t. Fortunately it did. It was an excellent catch.”

Despite the perfect execution, Payne gave credit to Grundy Center’s defensive back Adam Hoy, who forced Payne to have to make a perfect catch. 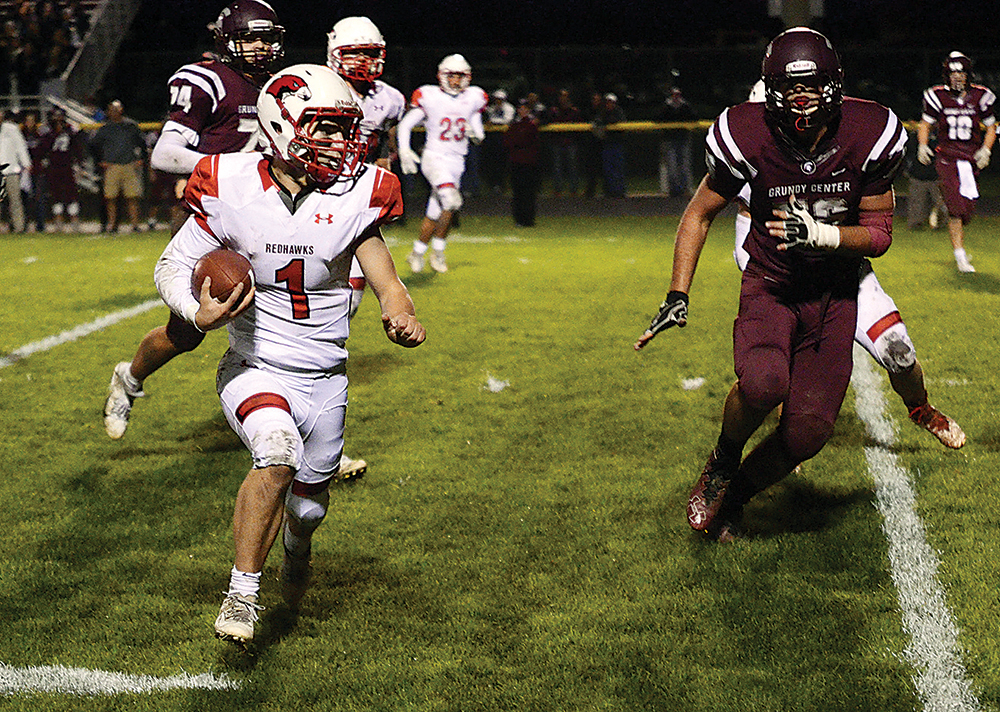 “Coach told me to do a slant corner and they threw it to me,” Payne said. “I thought it was good coverage by the defensive back. I couldn’t use my other hand. I had to use my other one.”

As for Kopriva, the credit went to Payne who had a similar play against Hudson earlier in the season.

“We had Tayte just kind of do his thing,” Kopriva said. “He showed that against Hudson and he did that tonight again. You just have to give that man the ball and he’ll do something with it. He’s a great player.”

Prior to the catch, Grundy Center (5-1, 3-1) had shut out North Tama’s shorthanded offense, which was without starting quarterback Skyler Staker, in the first half.

The Spartans took a 13-0 lead from a fumble and interception. However, the Spartans missed out on the opportunity to take a three-score lead after botching two short field goals which came back to haunt them. 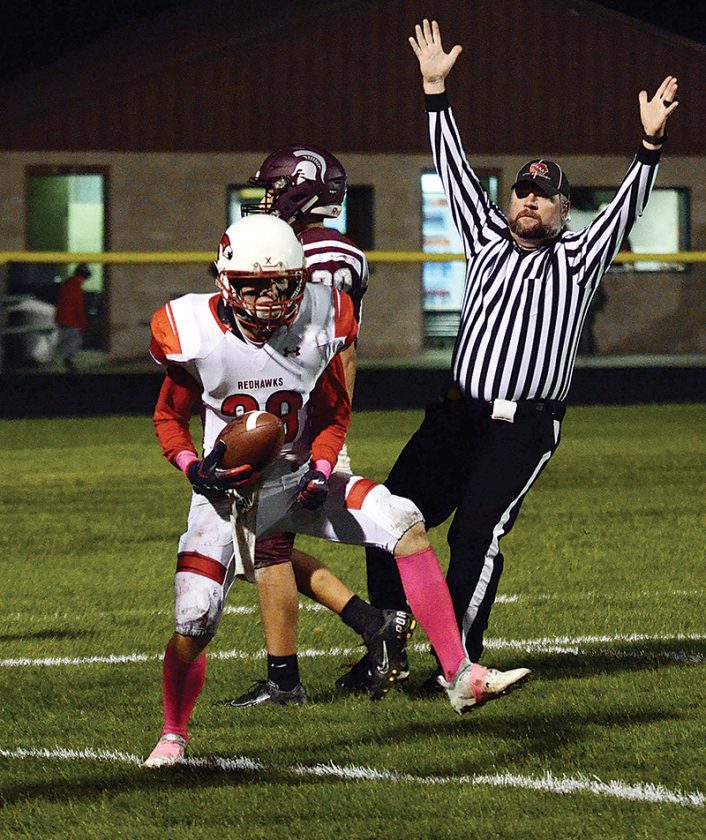 After halftime, North Tama scored on a 57-yard drive that was capped by running back Noah Weber, who scored on a 2-yard run. Weber totaled 75 yards on the night on 19 carries.

On the first attempt to take the lead in the fourth quarter, North Tama drove from its own 48-yard-line and moved inside Grundy Center’s 8-yard-line. The Redhawks ran a trick play that failed and had a bad snap that resulted in Grundy Center recovering a fumble.

Despite the miscue, the Redhawk defense held the Spartans to a three-and-out and held Grundy Center to just one converted first down in the entire second half.

On the second go-round, North Tama took over at Grundy Center’s 42 and drove inside the 20-yard-line. Again, North Tama was stopped short this time on fourth-and-1, but for a second time the Redhawk defense held Grundy Center to another three-and-out which led to the game-winning drive.

A key facet of North Tama’s turnaround second half was Kopriva sparking his offense with his legs as the quarterback finished with 84 yards on 11 carries and 3-for-8 throwing for 42 yards.

“He stepped up big-time,” McDermott said. “He’s a quick little guy. He used his skills as far as the running. He’s had a little trouble throwing this year, from actually a baseball injury that’s bothered him. He threw some nice passes tonight. He’s a threat running the ball. He’s a competitor.

The win keeps North Tama undefeated and gives the Redhawks a leg up in Class A District 7.

“You got to have a little luck too,” McDermott said. “That was a heck of a throw and a heck of a catch. We tried a little trick there and it didn’t pan out for us. Our defense stepped up and got a stop.

“I don’t know how many times is the charm but that’s a heck of a football team that we faced. They are very well coached. They have size, strength and speed. They run the ball well. They throw the ball well. They are outstanding defensively. We were fortunate that we would find a way to win. We have to now build on that.”