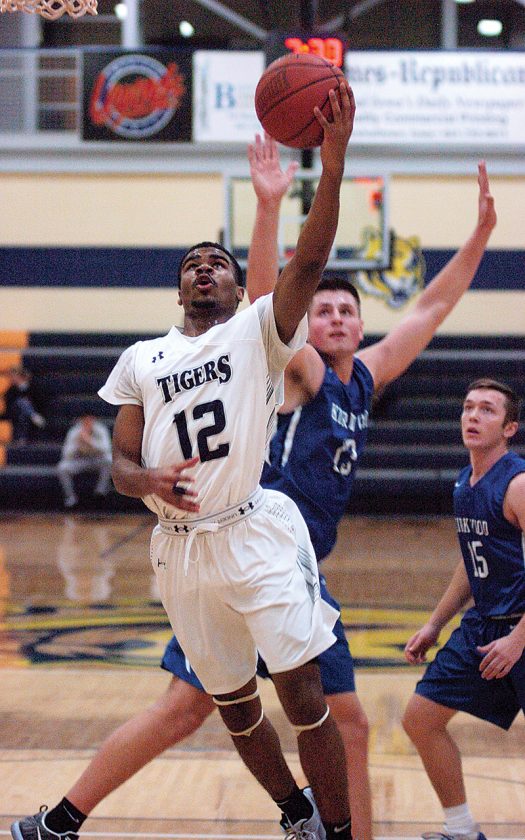 T-R PHOTO BY ROSS THEDE - Marshalltown Community College freshman guard Jaylin Scott (12) drives in for a layup past Kirkwood defenders Luke Appel and Griffen Clark, right, during the first half of Wednesday’s game at the Student Activity Center.

First-year head coach Ryan Flack added them all together and got an overall improvement in the Tigers’ performance, but for the fifth time in six games it was a loss on the scoreboard.

The Tigers (1-5) never led and fell behind by as many as 20 in the second half before making a too little, too late charge over the final five minutes.

“If our defensive possessions were like that earlier in the game, that would have made a difference,” said Flack. “Often times when our defense is good, our offense is too, and when we’re sharing the ball it’s good too.” 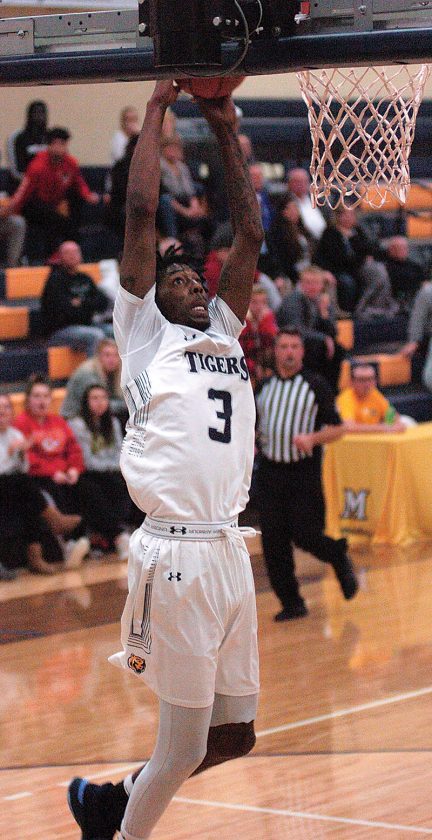 But the Tigers, who trailed 68-48 with 5:22 left in the game, tardily decided to put the pedal down on both ends of the court. MCC started its comeback with an alley-oop dunk from Caleb Jacobs to Jaqwell Wilson, but Wilson was whistled for a technical foul for his brief taunt of a Kirkwood defender.

One step forward, one step back.

“Sometimes we get so much tunnel vision, we just think we’ve got to go and make a play and we have two guys open,” Flack said. “The more we share the ball, and I thought at times we did a better job today, and even though we got beat on the glass, I thought we were better than in previous games. It’s been an emphasis on sharing the ball and rebounding.

“It’s, to me, simply just defend, rebound and we’ve got to share the basketball, but that’s probably every coach’s three things.”

And even though Wilson’s technical foul resulted in a pair of Kirkwood free throws, it sparked the Tigers’ comeback. MCC outscored Kirkwood 10-1 over the next two minutes and 14-5 going into the final minute, clawing back to within single digits. Wilson and Jacobs combined to score all 14 of those points, and Wilson actually racked up 15 in a row before Jaylin Scott splashed a 3-pointer to cut the Eagles’ advantage to 77-71 but with 6 seconds left. 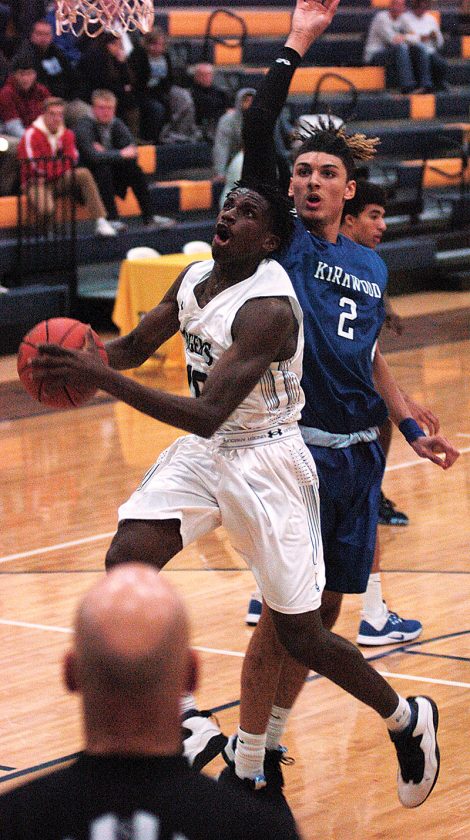 Devonte Thedford finished off ninth-ranked Kirkwood’s win with a pair of free throws, leaving MCC on the short side of its home opener.

Thedford netted a team-leading 19 points for the Eagles, going 11-of-12 from the free-throw line. It started for him before the game did, as Thedford went 1-for-2 at the charity stripe after MCC was ticketed with a technical foul for dunking during pre-game warmups, briefly neutralizing the raucous, partisan fan base the Tigers had going for them in their first home game.

“For us it’s about defending, rebounding and getting better every day, and I do think we’re getting better every day,” Flack said. “We’re close, just our margin for error is so small. So when you start the game off with a technical foul because we dunked in warmups, we can’t have those little things. Did that make the difference in the game? No, but that’s the way we started it.”

Wilson, a 6-foot-7 freshman from Irvington, N.J., finished with game-highs of 25 points and 10 rebounds for his first collegiate double-double despite coming in off the bench. Jacobs added a double-double of his own with 13 points and 11 assists while playing all 40 minutes.

“Jaqwell’s a guy who is pretty versatile, he can play the 1-5 and I like him around the rim but he can step out and it’s a mismatch for guys because he’s long, lanky, quick and athletic,” Flack said. “We’ve got to keep him doing that, we’ve just got to have some other guys step up and when their number’s called be able to defend and when we get an open look, knock down shots.”

Marshalltown High School graduates Jacob Smith and Sunday Arou both started for MCC, scoring 10 and six points, respectively. Both former Bobcats made a pair of 3-pointers.

T-R PHOTO BY ROSS THEDE – Marshalltown Community College freshman guard Jaylin Scott (12) drives in for a layup past Kirkwood defenders Luke Appel and Griffen Clark, right, during the first half of Wednesday’s game at the Student Activity Center. 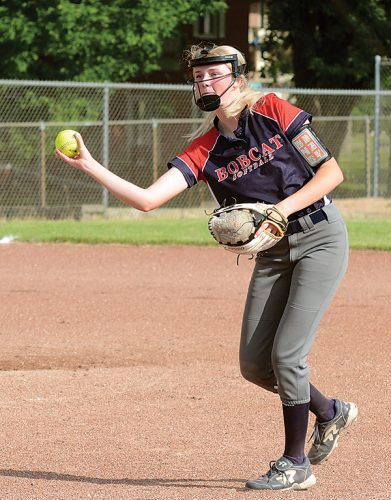 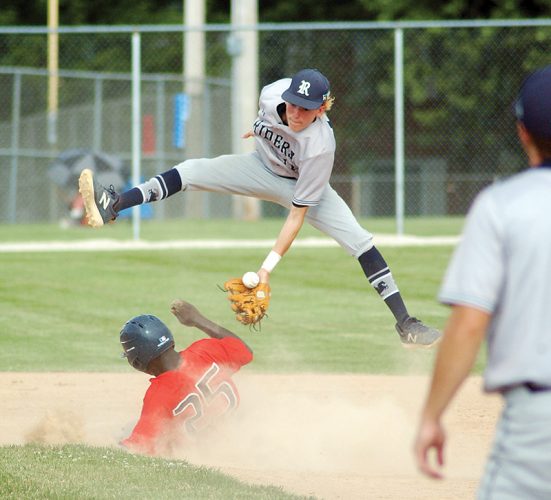 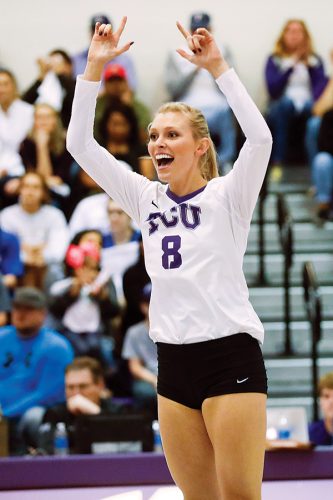