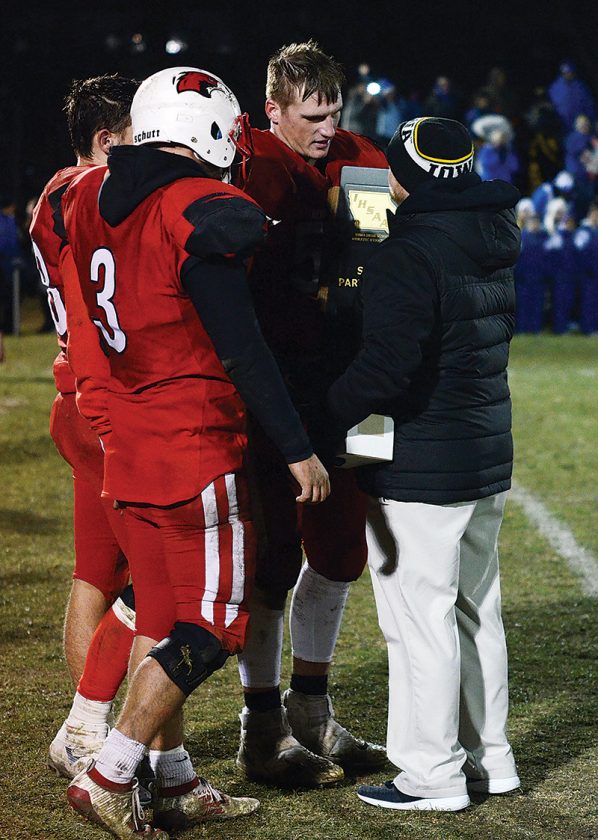 TRAER — It was a heartbreaking ending for the North Tama football on Friday night.

Leading 23-6, the No. 3 Redhawks found themselves on the opposite end of a comeback win. Woodbury Central scored 28 unanswered points to upset North Tama 34-23 and bring an end to the Redhawks’ undefeated season.

The difference on the night — turnovers.

“Those things are going to happen,” head coach Tom McDermott said. “Both sides had interceptions. We are not a passing team and they are tremendous against the run. They probably have the best run defense in the state. Nobody has run on them all year. We found we could do somethings throwing but we needed a couple of first downs in that fourth quarter and couldn’t do it.”

At the start of the first quarter, the both teams totaled two turnovers each. 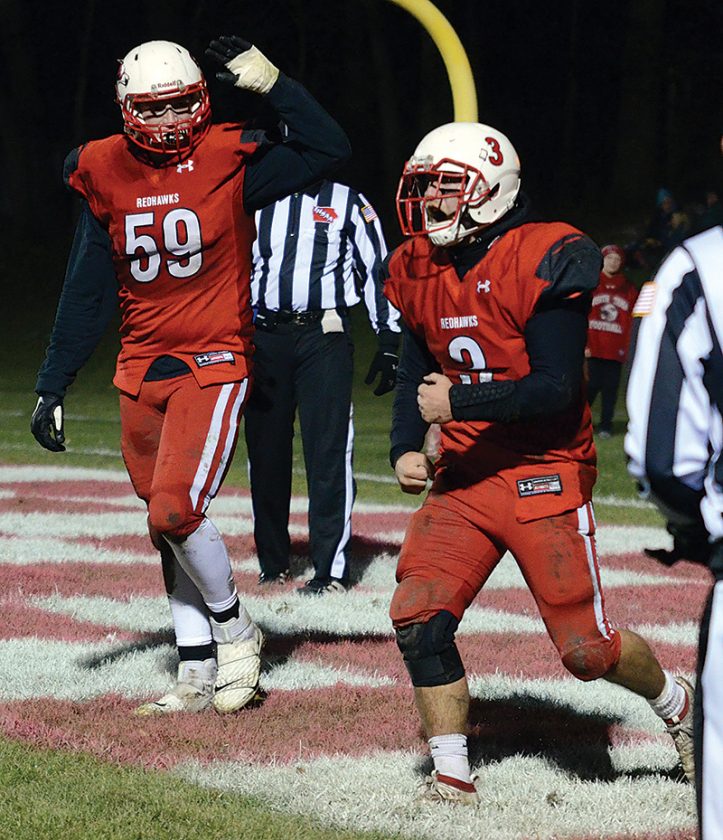 Woodbury Central got on the board first with a touchdown after North Tama muffed a snap on a punt and scored quickly from the short field position.

The North Tama offense then found life with a 57-yard touchdown pass from Gabe Kopriva to Tayten Payne. The Redhawks then kick an unexpected yet successful onside kick. A quick 32-yard catch from Pennell set up an 8-yard touchdown run for Skyler Staker to take a 15-6 lead into halftime.

Out of halftime, Staker connected with Pennell for a 30-yard touchdown to take 23-6 lead midway through the third quarter.

Staker, who played through the night with a knee injury, ran for 78 yards and a touchdown while passing for 148 yards, one touchdown and two interceptions.

“It’s senior year,” Staker said. “I had to do it for my team and leave it all out there. If I was going to get hurt more I was going to do what I have to do to give us an opportunity to win.” 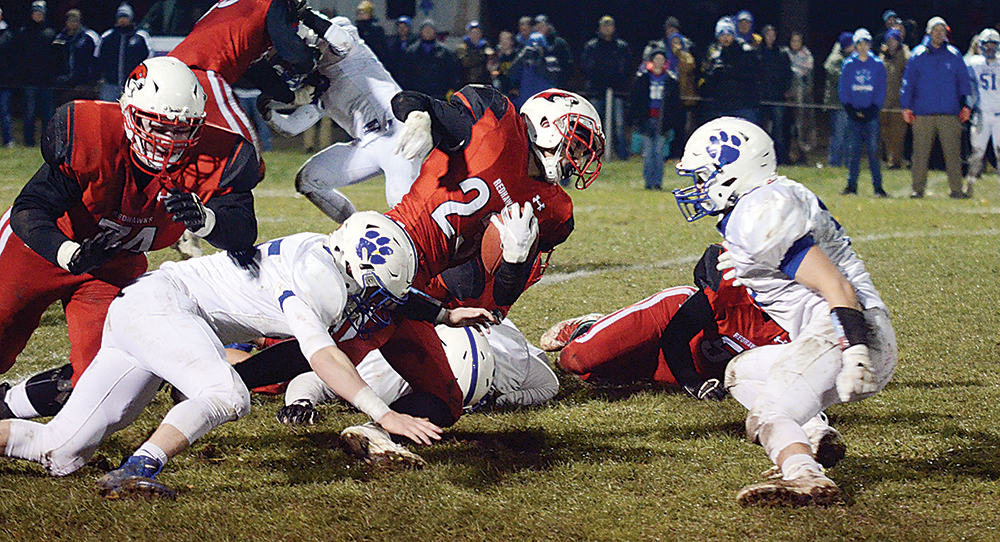 The momentum shifted after Woodbury Central scored on a pivotal fourth-and-1 with one minute left in the third quarter to cut the lead to 23-13.

“I think the momentum changed after their first score after we were up 23-6,” McDermott said. “We just couldn’t get to the quarterback and couldn’t make tackles — things we have been doing all season and most of the game. I’m not taking anything away from them. Their quarterback did an excellent job. They have excellent receivers. Their line did a great job of pass protecting because we couldn’t get through them.”

North Tama then tried to play more conservative with its run game but the Wildcats’ run defense forced a quick three and out.

Woodbury Central quarterback Jase Manker then found life in his arm after throwing two interceptions to start the game. Manker threw an 11-yard touchdown pass to make the score 23-20.

North Tama’s offense continued to play somewhat conservatively. However, the Redhawks were stopped short on a pivotal fourth-and-4 which gave the ball to the Wildcats with five minutes left in the game. McDermott credited both Woodbury Central’s offensive and defensive lines as key to turning the tide of the game.

“I think both offensively and defensively their line controlled our line,” McDermott said. “We knew they were good at the line but I thought we were too and I still think we’re pretty decent.

“I would say we didn’t really do a good job at the end. We didn’t do what we needed to do. We played well for three quarters or so [but] I can’t explain [what happened].”

On the ensuing drive, Manker threw a 32-yard touchdown pass to take the lead 27-23. Manker finished the night 17-for-35 passing for 246 yards, two touchdowns and two interceptions.

“We’re a team defense and we didn’t execute as a team there at the end,” McDermott said. “We didn’t contain the quarterback, we didn’t tackle real well, we didn’t cover well — just too many mistakes. I don’t think that we felt we had the game won, I just think we got exposed into some things that they did better than we did.”

The Redhawks attempted to mount a game-winning drive with just over three minutes left but instead, another turnover ended both the game and season. The Redhawks fumbled, which led to a scoop-and-score touchdown to seal the win for Woodbury Central.

In total, North Tama had two fumbles, two interceptions and a bad snap on a punt in the loss.

Despite the loss, the Redhawks finish the season as the fifth team to go undefeated in the regular season in school history as well as district champions.

“We talked all year long about taking the next step,” McDermott said. “The kids did that and we accomplished several things that we haven’t done for a long time. We won the district, won 10 games [and] won a playoff game. We talked a lot about this week about advancing to the Dome. We were close but we just didn’t finish. Historically, we have been pretty good about finishing this year and last year and doing what we needed to do at the end of a game. [Woodbury Central was] better than we were tonight.”