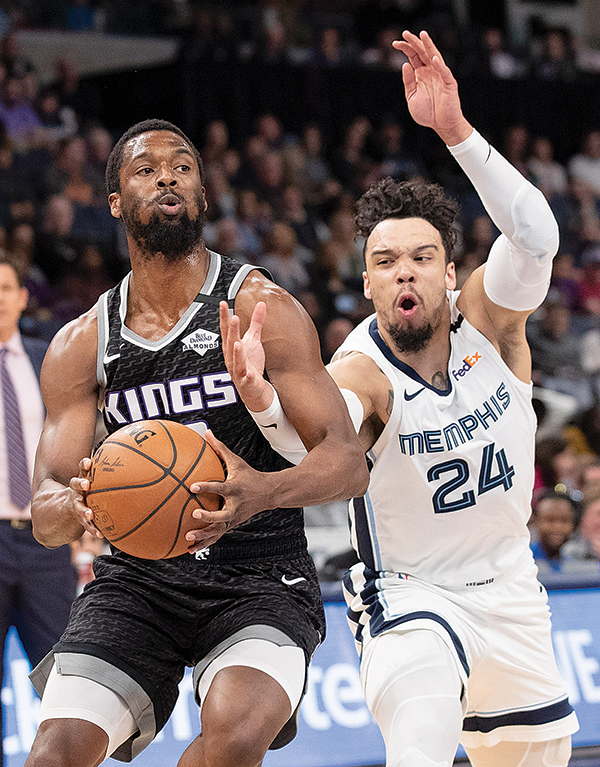 AP FILE PHOTO - Sacramento Kings forward Harrison Barnes, left, drives to the basket while defended by Memphis Grizzlies guard Dillon Brooks (24) during the first half of an NBA game Feb. 28 in Memphis, Tenn. Barnes, an Ames native, became the latest NBA player to reveal that he has the coronavirus.

LAKE BUENA VISTA, Fla. — Harrison Barnes of the Sacramento Kings became the latest NBA player to reveal that he has the coronavirus, making the announcement Tuesday and saying he has hopes to join his team for the league’s restart later this summer.

Barnes is the only player who has started all 64 of the Kings’ games this season. To extend that streak, he’ll need to be cleared and arrive at Walt Disney World before Sacramento’s season resumes with the first of its eight seeding games on July 31 against San Antonio.

“Prior to the team leaving last week, I tested positive for Covid-19,” Barnes wrote on social media. “I’ve been primarily asymptomatic and am doing well. I’m quarantined and am abiding by the safety protocol until I’m cleared for action. I hope to join my team in Orlando when it is safe to do so! Stay safe out there.”

Barnes is averaging 14.7 points this season for the Kings.

The league said Monday that 19 players tested positive during in-market testing after July 1, those tests being done before teams began arriving at Disney on July 7. Based on the timetable Barnes used in his message, it’s likely that he was one of those 19 players in the NBA’s latest count.

The Kings have gotten Buddy Hield and Jabari Parker back after each had positive tests. Alex Len, however, remains out after his positive test, and now Barnes is in that situation as well.

“We have to prepare as if we’re not going to have either one of those guys,” Sacramento coach Luke Walton said. “That’s just getting ready for whatever the worst-case scenario may be.”

Denver’s Nikola Jokic, who tested positive last month, is now at Disney and the Nuggets are waiting to see when the All-Star is going to be cleared to get on the floor.

“I have seen Nikola. It’s been somewhat limited and his interaction with his teammates and other coaches has been very limited as well,” Nuggets coach Michael Malone said Tuesday night. “That’s kind of where we’re at with it right now.”

Houston’s Russell Westbrook said Monday that he has tested positive and has yet to join the Rockets at Disney. Many players have chosen to not make their diagnosis public, including two players who tested positive after arriving at Disney last week — but never got out of quarantine and into the NBA’s so-called bubble.

“This is the reality of the world that we’re living in right now, with the virus,” Miami coach Erik Spoelstra said. “We’re putting together something that we think really is safe and has everybody’s health as the No. 1 priority. But we know that nothing is 100 percent guaranteed. You have to adhere to the protocols. Everybody has to be mindful of it and respect what we’re trying to get done here.”

Heat forward Derrick Jones Jr., who tested positive for the virus last month and has since recovered to be part of Miami’s workouts at Disney, said he never exhibited any signs of illness.

“Physically, I felt great,” Jones said. “I never felt a symptom at all.”