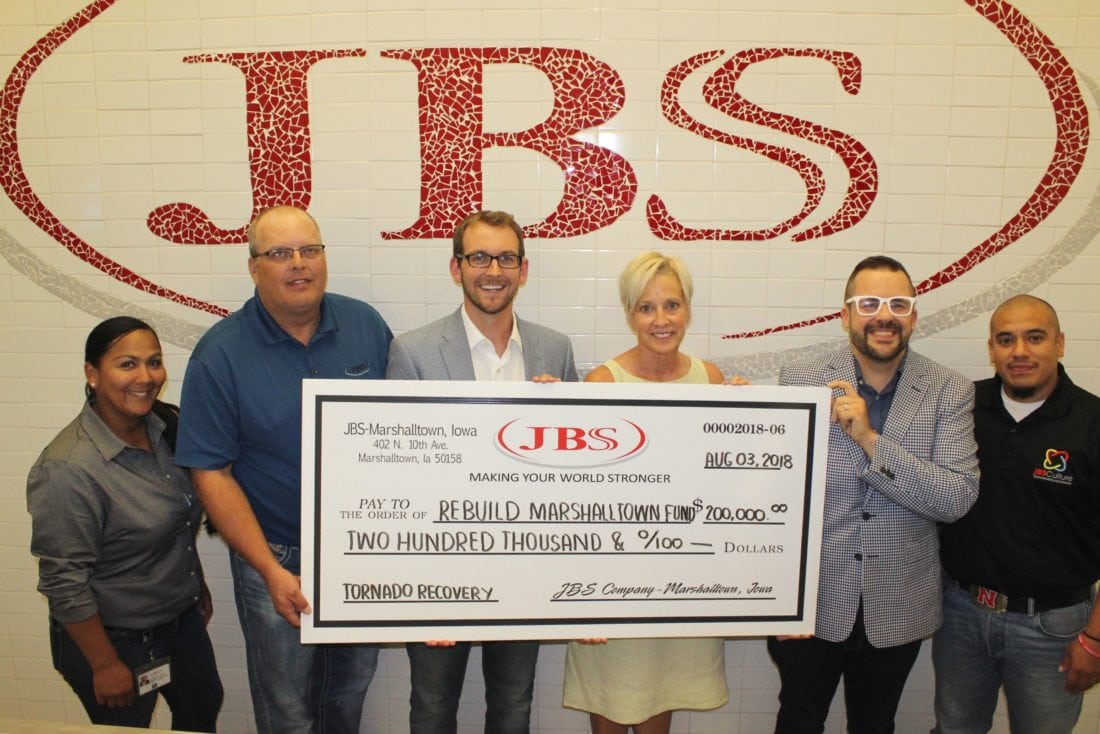 JBS USA announced $1 million in donations to assist in tornado relief efforts, according to a press release.

The money is set to “assist JBS USA team members, and to support long-term rebuilding efforts and community recovery needs” from the tornado that tore through the city on July 19, according to the release. JBS is Marshalltown’s largest employer with 2,300+ employees, many who had homes affected by the storm.

JBS donated $200,000 to Mid-Iowa Community Action, Inc. (MICA), which has pledged to help tornado victims and particularly those with low income.

“I don’t have to tell anyone from Marshalltown what a huge impact the tornado has had on our community’s families. We, at MICA, have seen literally hundreds of those families in the last two weeks,” said Arlene McAtee, MICA executive director, in the release. “The needs are large and diverse. This enormously generous gift from JBS is not only about addressing these needs, but telling the families and the community that there is hope and there are many in the JBS family who want to share in their recovery.

“We are very humbled by and grateful for this gift. It will be used to help so many families with their immediate needs and assist them with their longer term recovery.”

JBS also donated $200,000 to the Rebuild Marshalltown Fund, which was established by the Community Foundation of Marshall County to raise money for long-term community rebuilding efforts.

“The Community Foundation of Marshall County is dedicated to helping people help their community,” said Dylan Does, Community Foundation of Marshall County director in the press release. “During this trying time, we have seen the power of this mission in action as our community has come together to help our neighbors in need. We are incredibly grateful for JBS’s generosity and commitment to Marshalltown and the Rebuild Marshalltown Fund and it will be used for the significant rebuilding that lies ahead.”

JBS committed to paying all Marshalltown employees “for a lost day of work due to the plant shutdown and the resulting reduced work hours” as well as providing financial assistance to those directly impacted by the storm, according to the release.

JBS has also been helping around the community through volunteerism and several food donations to feed those affected. The company has donated an additional $600,000 to assist Marshalltown team members and the Marshalltown community from individual donations from JBS USA and Pilgrim’s Pride team members via the United Way, according to the release.

“Marshalltown is without question one of our flagship operations across the entire JBS global enterprise,” said Martin Dooley, president and COO, JBS USA Pork in the release. “We routinely bring consumers, customers and foreign dignitaries to see the plant and experience the community of Marshalltown. The plant and the town are well-known and respected all around the world. We hope that getting the plant up and running again coupled with our financial investment in the community will help bring some modest amount of relief and comfort to the people of Marshalltown.”

The Marshalltown plant has been part of the community since 1880 and was acquired by JBS USA in 2007.

“We have a long and storied history in Marshalltown,” Dooley said in the release. “I lived and worked in Marshalltown for several years, so this devastating event resonates with me personally. We just want to do our part to help Marshalltown not only recover, but come back stronger than ever.”