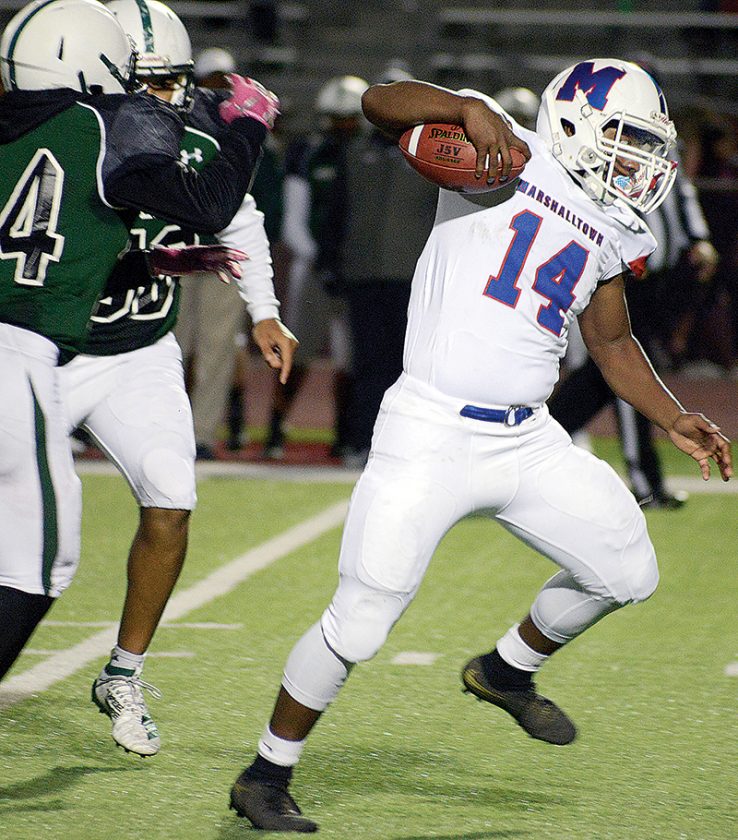 T-R PHOTO BY ROSS FUGLSANG - Marshalltown running back Auron Greenwood (14) splits a pair of Sioux City West defenders during Friday’s Class 4A District 2 football game at Elwood Olsen Stadium on the campus of Morningside College in Sioux City. Greenwood rushed for a team-high 69 yards with a touchdown as the Bobcats won 57-12.

SIOUX CITY — The Marshalltown defense not only set the tone. It started the scoring, too.

The Bobcat football team got an eight-point boost from its defense and the offense did the rest as Marshalltown roughed up Sioux City West 57-12 in Friday’s Class 4A District 2 contest at Elwood Olsen Stadium.

Marshalltown (5-1, 1-1) got a safety from its defense just two plays into the game, added a fumble return for touchdown on the first snap of Sioux City West’s next possession and pitched its second shutout of the season. Patrick Landeros stripped Wolverines quarterback Koby Pearson of the ball and bounded 20 yards for the score four plays after the Bobcats failed to take advantage of favorable field position following the safety.

The touchdown for Landeros made it 8-0 Bobcats, and another strong defensive stand got Marshalltown the ball back at the Sioux City West 8-yard-line. Carson Beals finished off the short field with a 1-yard touchdown plunge, and the extra-point kick by Kabba Pins pushed the Bobcats’ advantage to 15-0 just past the midpoint of the first quarter.

West’s Keaviean Hayes took the ensuing kickoff back 97 yards for a touchdown, but Marshalltown responded by scoring the game’s next 42 points and guaranteed itself a winning regular season. 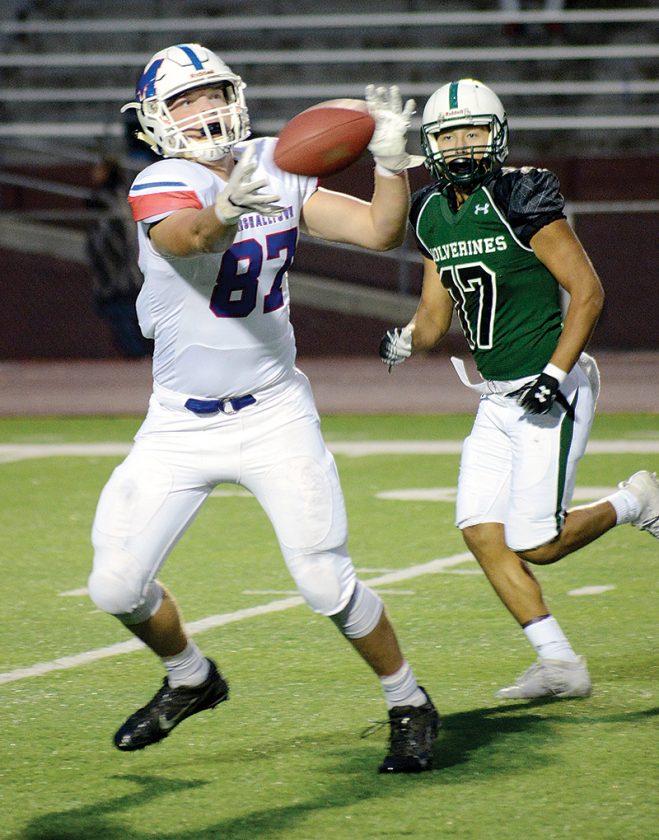 “The defense played outstanding, but we’ve got to clean up a lot of things special teams-wise and all around,” said MHS head coach Adam Goodvin. “I think we had effort, it was there tonight, but it was inconsistent. Our effort’s got to improve and it’s got to be every single play, and we’ve got to improve our execution.”

The Bobcats gained 364 yards of total offense, unofficially, with 221 of them coming on the ground and the other 143 through the air. MHS quarterback Brendan Bates threw for a touchdown and ran for another, but spoiled savory field position with an interception four plays after Marshalltown got the ball back on the safety.

“Like I told the guys, ‘don’t expect to get off the bus and get a win, that’s not how it works,'” Goodvin said. “Credit to Sioux City West for playing hard and I’m very happy with how hard our guys played to come out of there with the win. We had to get a good push and disrupt their offense and for the most part, defensively, we played pretty well.”

Malik Haynes a pair of rushing touchdowns for the Bobcats, crossing the goal line from 2 and 14 yards away, and Pins added a short touchdown run of his own. Auron Greenwood got his first varsity carries of the season and rushed for a team-leading 69 yards, highlighted by a 5-yard touchdown run that made it 36-6 Bobcats with 4 minutes left in the first half.

Bates connected with Will Van Buren on a 28-yard touchdown pass to open the third-quarter scoring before runs by Haynes and Bates made it 57-6 Bobcats with 9:40 left to play.

Sioux City West’s final touchdown was a 50-yard scoop-and-score by DeVaunte Coleman, who got a good bounce on a Bobcat fumble and dashed half the field for the game’s final points.

Marshalltown will be back out on the road next week with its second-straight game on a college campus, meeting Des Moines Roosevelt (5-0, 2-0) in a 7 p.m. game at Drake Stadium.

The Roughriders knocked off the Bobcats last year, 20-15.

“They’re much improved from last year,” Goodvin said. “Our guys are excited, it’s going to be a dogfight.”

T-R PHOTO BY ROSS FUGLSANG – Marshalltown running back Auron Greenwood (14) splits a pair of Sioux City West defenders during Friday’s Class 4A District 2 football game at Elwood Olsen Stadium on the campus of Morningside College in Sioux City. Greenwood rushed for a team-high 69 yards with a touchdown as the Bobcats won 57-12.