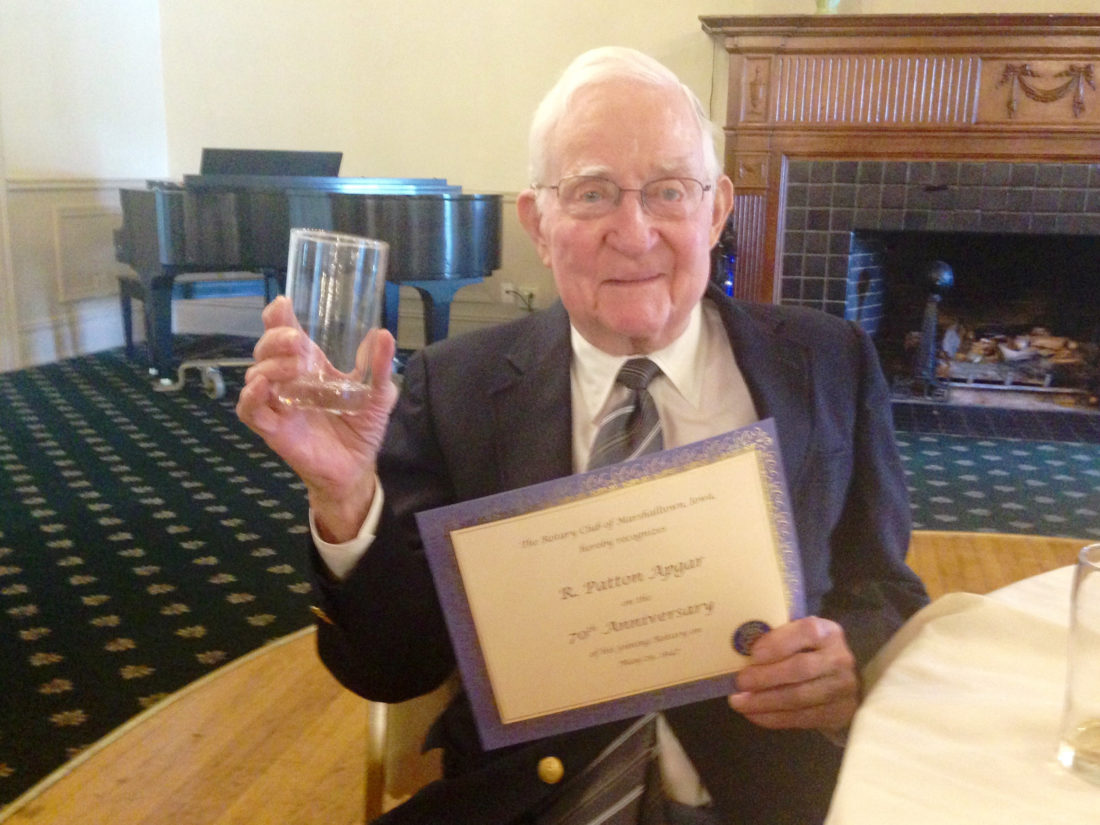 CONTRIBUTED PHOTO Rotary members helped Pat Apgar celebrate his 70th anniversary of membership this week. Apgar is holding the glass he joked about returning to Elmwood. He told the story of having it in hand during a fire evacuation at a meeting years ago.

The Girls state golf meet was being held at Elmwood, so parking for the May 30 Marshalltown Rotary luncheon was scarce. John Fink opened with the meeting with prayer and Pledge of Allegiance. Guests included David Giese and UnityPoint President Dustin Wright.

Apgar joked that it is tough to condense 70 years in short order but took the gathered members down memory lane with comments and stories about menus, venues and programs. Holding up the glass he walked out with when Elmwood was evacuated for a kitchen fire, he drew chuckles for bringing it back to Elmwood minus the contents. Congratulations to Pat on this remarkable milestone.

Joann Neven is a former teacher and was on hand to present a program on the Binford House. The house located at 110 N. Second Ave., was constructed in 1874 by Thaddeus and Angelica Binford. Neven described the setting of the time and proceeding with a history of the family that resulted in the gift to the Marshalltown Federation of Women’s Clubs in 1930. Brochures at each table highlighted the Italian style of this grand house which is a National Historic Register landmark.

When Neven last visited Rotary, she reported on the improvements to the driveway, ramp and landscaping. She described some of the upkeep work that, in true Quaker spirit, did not begin until cash was raised to complete. There is now an endowment to help ensure its upkeep.

Binford House provides tours and meals and provides a great venue for entertainment and events.