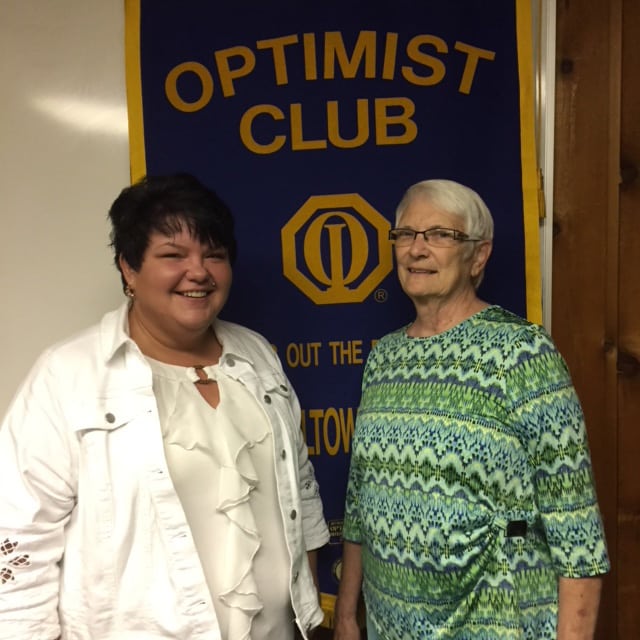 The Marshalltown Morning Optimist Club met Tuesday at Cecil’s Cafe for its regular weekly meeting. President Dorothy McHone opened the meeting with the recitation of the Pledge of Allegiance. Guests were Jodi Bowden-Fuentes and Brad Helland.

Club business included discussion of ways the club can best help youth affected by the July 19 tornado. Last-minute plans were made for those attending the Iowa District Optimist Convention on Aug. 4.

McHone introduced the program speaker Bowden-Fuentes from the LUNA organization. Bowden-Fuentes, program coordinator for the Marshalltown office, described the organization as an Iowa-based culturally specific agency centralized in Des Moines. The name originally stood for “Latinas Unidas Por Un Nuevo Amanecer,” but now aligns with the motto “Latinas United for a New Dawn.”

According to Bowden-Fuentes, LUNA serves victims of domestic and sexual abuse who have cultural barriers. In Marshalltown, it also serves persons who are victims of all crimes, since there is no other local agency serving that need. One of the programs is “Teddy Bears for Tears,” which provides donated teddy bears for children who have been impacted by police action.

Another program involves collecting shoes to represent victims of domestic and sexual abuse. The shoes are displayed publicly to remind viewers of the persons affected by such abuse. Shoes are then donated to persons who have need.

Bowden-Fuentes is usually located in the Marshalltown office in the City Center on Main Street, but currently works out of the Des Moines office until the damaged City Center has been deemed safe for occupancy.

The meeting concluded with the recitation of the Optimist Creed.

The Morning Optimists meet Tuesdays at 6:30 a.m. at Cecil’s Cafe. Visitors are welcome to attend and to view the website at www.morningoptimists.com

The Veterans of Foreign Wars Auxiliary of Post 839 met on July 16 at the post home. The meeting started at 6 p.m. ...