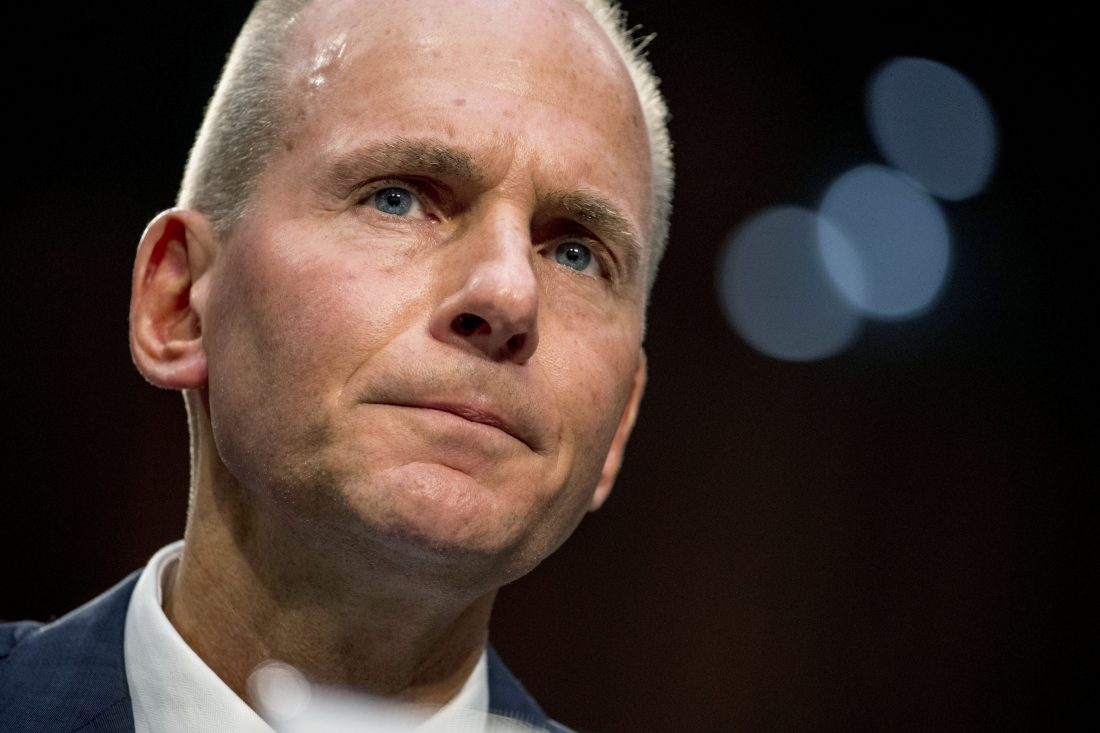 FILE - In this Oct. 29, 2019, file photo Boeing Company President and Chief Executive Officer Dennis Muilenburg appears before a Senate Committee on Commerce, Science, and Transportation hearing on 'Aviation Safety and the Future of Boeing's 737 MAX' on Capitol Hill in Washington. Muilenburg is resigning amid ongoing problems at the company over the troubled Max 737 aircraft. The board of directors said Monday, Dec. 23 that Muilenburg is stepping down immediately. The board's current chairman David Calhoun will become president and CEO on Jan. 13, 2020. (AP Photo/Andrew Harnik, File)

NEW YORK — Boeing ousted CEO Dennis Muilenburg on Monday with no end in sight to the crisis that has engulfed the vaunted American aircraft manufacturer since the crash of two of its 737 Max airliners.

The Boeing board had supported Muilenburg for months despite calls for his resignation from lawmakers and relatives of the passengers killed. When it became clear in recent days that federal regulators would not certify the grounded Max to fly again by year’s end as Muilenburg had hoped, the board finally abandoned him.

Board members decided to remove him on a conference call Sunday, according to a person familiar with the events who discussed the private deliberations on condition of anonymity.

The move came after another bad week for Boeing. The aerospace giant had announced it would temporarily halt production of the Max because it wasn’t clear when it could deliver the planes. And Boeing’s new Starliner space capsule went off course during a bungled, unmanned test flight to the International Space Station.

The company said Muilenburg departed immediately and its current chairman, David Calhoun, will take over as CEO on Jan. 13.

Boeing said it decided it needed new leadership to regain the confidence of regulators. The company — which has been criticized over the design of the Max, Boeing’s failure to tell pilots about a new flight-control system on the plane, and its handling of the crisis after the first crash — promised a “renewed commitment to full transparency.”

Boeing declined to make Calhoun or other executives available for comment.

Muilenburg had been CEO since mid-2015. The company’s stock soared during most of his tenure, as Boeing benefited from strong demand for new planes to meet the growing demand for travel around the world, although the shares have fallen 24% since peaking just before the second crash.

Boeing began designing the Max in 2011 to compete with a new plane from Airbus that was cutting into sales of Boeing’s venerable 737. Critics, including members of Congress, say that Boeing, with the Federal Aviation Administration’s help, rushed the plane into production and minimized safety risks.

In October 2018, a brand-new Max operated by Indonesia’s Lion Air crashed into the sea near Jakarta. Five months later, in March, an Ethiopian Airlines Max went down shortly after takeoff from Addis Ababa. All 346 people aboard the two planes were killed.

Muilenburg was faulted for Boeing’s initial response to the accidents, when he and the company seemed to blame the foreign pilots. Criticism of Muilenburg grew in recent months as news reports and congressional investigations disclosed internal Boeing documents that revealed concern within the company about key design features on the Max, especially the new automated MCAS flight-control system that investigators say played a role in the two crashes.

A faulty sensor caused the system to activate before the two disasters, pushing down the nose of both planes. Boeing had not told pilots about MCAS until after the Lion Air crash, and regulators at the FAA didn’t know much about it either.

Earlier this month, the House Transportation Committee disclosed an internal FAA analysis made after the first crash, which estimated that there would be 15 more fatal crashes over 45 years until Boeing fixed MCAS. Yet the FAA did not ground the plane until the second crash.

“This is something that we have been asking and struggling for quite some time,” he said. “The CEO reluctantly and deliberately kept the aircraft in service after the Lion Air crash. The Ethiopian Airlines crash was a preventable accident.” He added: “What they did was a crime.”

“Under his watch, a long-admired company made a number of devastating decisions that suggest profit took priority over safety,” DeFazio said. “Furthermore, reports that Muilenburg attempted to pressure FAA into rushing the Max back into service are highly troubling.”

FAA Administrator Stephen Dickson expressed concern this month that Boeing was pushing for an unrealistically quick return of the Max.

The worldwide grounding of the Max in the wake of the two crashes has undercut orders and deliveries of new planes and caused Boeing to burn cash. With Boeing in turmoil, European rival Airbus has surged far ahead of the Chicago-based company this year.

The shutdown in Max production is likely to ripple through the Pacific Northwest and Boeing’s vast network of 900 companies that make engines, bodies and other parts for the plane.

The Max debacle has put the spotlight on Boeing’s culture, which some current and former employees say changed from one driven by engineering to a top-down management system in which containing costs and maximizing profit — and driving the stock price higher — became an obsession.