Stuff the Bus’ at Morning Optimist 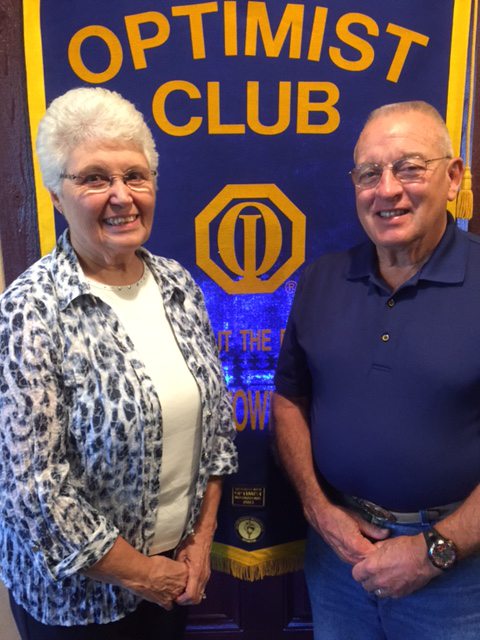 CONTRIBUTED PHOTO Morning Optimist Club member Doug Noid, right, welcomes guest speaker Rita Smith, who explained the process of the annual “Stuff the Bus” school supply give-away at a recent club meeting. Smith is one of the 54 volunteers who assist with receiving, sorting, distributing and shopping for the hundreds of backpacks full of supplies that are given to qualifying families prior to the beginning of the school year.

The Marshalltown Morning Optimist Club held its weekly meeting Tuesday at The Brew House. Co-President Linda Moore opened the meeting with the Pledge of Allegiance and a moment of reflection.

Dorothy McHone reported that the storage shed for flags will be open at 6:15 a.m. and 6 p.m. for the Labor Day flag raising. There have been 25 new subscriptions to process for the fall holidays.

Leigh Bauder thanked the club for their donation toward the Splash 4 Life project, for which she is a coordinator.

Doug Noid, program chair, introduced Rita Smith as the guest speaker. Smith is one of the volunteers who coordinate the “Stuff the Bus” school supplies collection effort before school begins in the fall. Smith described herself as a retired teacher who still substitutes, and “likes to keep her fingers in education.”

According to Smith, the “Stuff the Bus” program began 16 or 17 years ago at the House of Compassion when children could come to pick up supplies as needed. It has grown to the point at which more than 1,000 backpacks were given out during its peak year. Now, said Smith, they are down to about 800 given out.

Smith described the process as an event that takes place over a single weekend. The bus is located at Hy-Vee and also at Walmart for people to make purchases and take them to the bus. Donation boxes are placed at banks, retail stores, hair dressers, the hospital and clinics. Items are unloaded and stored at St. Paul’s Episcopal Church, where they are sorted. An assembly line of volunteers fill backpacks appropriate for pre-kindergarten through high school students. Families sign-up at the House of Compassion, and records are kept about what each family receives. As the families depart with their supplies, they may sign a thank you note for what they have received.

Smith indicated that left-over supplies are distributed to the schools. Volunteers are already shopping for next year’s event, buying backpacks at off-season sales. Their $4,000 budget is supported by service organizations and other donations.

Moore closed the meeting by leading the recitation of the Optimist Creed. The Marshalltown Morning Optimist Club meets Tuesdays at 6:30 a.m. at The Brew House. Guests are welcome. More information is available at the club’s website at www.morningoptimists.com.